Ahoy there, me hearties! Welcome to the wonderful world of Pirate Barnacles Blunderbeard! 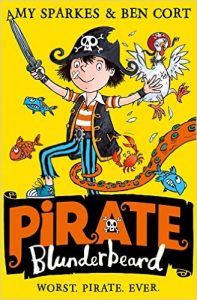 Blunderbeard is the most calamitous pirate ever to sail the Seven Seas – and he’s about to embark on many hilarious adventures, with his faithful, scrawny chicken (Boris) by his side.

I’m delighted to announce that Pirate Blunderbeard: Worst. Pirate. Ever. is the first book in a four-book deal with HarperCollins, illustrated but the fabulous Ben Cort and being released on 1st June 2017.

In this book, the unfortunate Blunderbeard has been entered into the POTY Award (The Pirate of The Year Award), complete with kraken-wrestling, plank-diving and treasure-hunting. But what chance does he have against the other fabulous, somewhat mean pirates, including his oh-so-wonderful big brother, Blackbeard? Problem is, if he doesn’t, he’s going to be kicked out of the pirate community for good.

The series is illustrated by the talented Ben Cort, well-known for his work on Aliens Love Underpants and subsequent pant-related books. I am thrilled to be working with such a brilliant and experienced illustrator who has completely brought Blunderbeard to life with such humour and creativity.

Big thanks to my fabulous agent, Julia Churchill, for doing the deal and to all at HarperCollins for loving the story. Special thanks to my brilliant editor, Harriet Wilson, for her help and enthusiasm.

I’m also delighted to share that 5% of author royalties from this series is going to a wonderful charity called ICP Support. ICP (intrahepatic cholestasis of pregnancy) is a rare liver complication in pregnancy, which can pose serious risks to the baby, including stillbirth. By donating to this charity, the Pirate Blunderbeard series will be contributing to funds for much-needed research to help save babies’ lives.

So step aboard The Flying Doughnut, and enjoy sailing the seas with Blunderbeard. Hope you have many giggles along the way.