A massive, sneeze-infused thanks to St. Leonard’s Primary School for having Little Robot in for a visit to help launch the new school library. It was wonderful seeing all the children dressed up in such fabulous costumes. 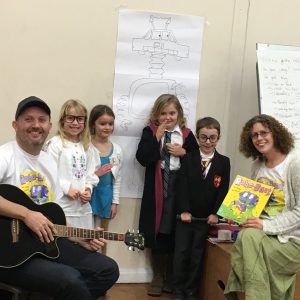 Illustrator Paul Cherrill and I had a brilliant time sharing Robo-Snot with the children: reading, drawing…

and sneezing all over the place. With the help of the children, Paul created some fabulous robots, including one with an entire car for its head.

I was particularly pleased to FINALLY achieve my ambition of snapping a photo of Paul in robot-antennae-mode.

Finally, I capture the moment…

The children loved Paul’s interactive Little Robot song (so you don’t miss out, check it out here) and I think we can both safely say we have never heard such enthusiastic sneezes in all our lives. So well done, St. Leonard’s, for joining in so heartily/snottily! 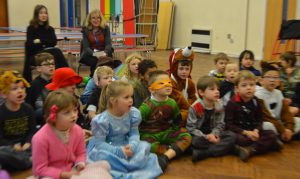 Sneezing so hard, it blurs the image. Excellent stuff.

There was also muchness of fun with Year 2, who created their very own dramatized Little Robot story with me. This time, Little Robot had grown some hair! A very un-robot thing to do. Cue a great deal of hilarity as poor Little Robot’s hair began to itch and he tried to manage nit combs, electrified scissors and even hair clippers until his sister comes to the rescue. The children discovered more about plotting a story with a beginning, a middle and end, and also how a robot would deal with headlice. Very useful. Specal thanks to the boy and girl who acted the parts of Little Robot and his sister. 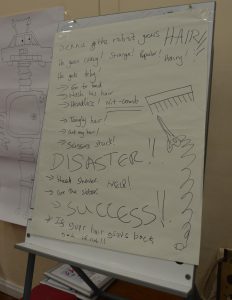 Thank you to everyone who bought a copy of the book, which is also raising funds for fabulous charity Ickle Pickles. 5% of author royalties goes to this baby charity, which donates life-saving equipment, such as incubators, to neonatal units across the country.

It was great fun doing the signing and meeting the children on a more personal level, especially as we were joined by fellow children’s author, Dan Metcalf, who also spent the day at St. Leonard’s (leading Years 3 and 4 on a literary adventure). 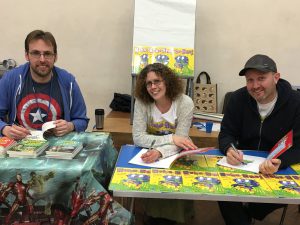 So thank you again, St. Leonard’s, for a wonderful day. Have fun with the robots we created – and maybe you can come up with another story about them!