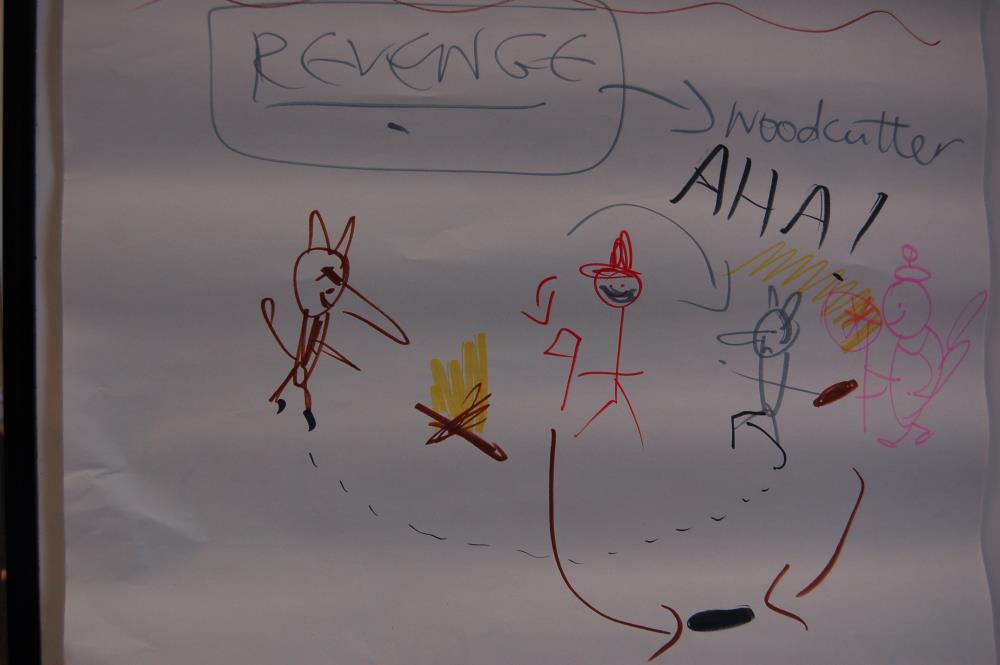 Posted at 06:21h in Books, Do Not Enter the Monster Zoo, Gruff, Inspiration, Schools, Short stories by Amy Sparkes
0 Likes

I love fairy tales – the fun, the magic, the characters, the darkness…so when I was invited into Wellesley Park Primary School for an entire day devoted to fairy tales and fantasy, I was a little bit excited…

The day began with a misty, magical drive across the Devon and Somerset countryside. A wonderful start (despite the fact that the mist meant I couldn’t actually see where I was going and I got lost).

Nursery and Reception had fun with Do Not Enter the Monster Zoo. I was very impressed that one little pre-school boy seemed to know the story better than I did, and was right on cue with making sound effects and finishing my sentences for me! While Nursery went to create some monstery masks, Reception and Years 1 & 2 enjoyed creating their very own monsters, which resulted in some most odd creatures indeed: 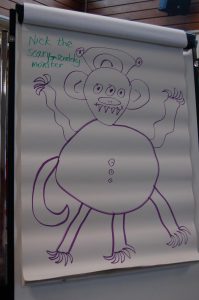 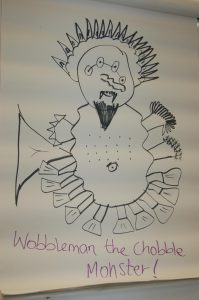 I was also touched that one of the boys had been up from 6.30am that morning, writing his very own story to share with me – thank you! 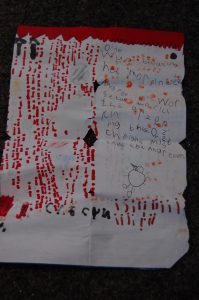 The children in Years 3 – 6 had tremendous fun with their workshops: ‘What Happened Next?’ They came up with imaginative ideas about what happened to the fairy tale characters after the tale ended. I read them a short story I wrote for Aquila Magazine called The Man in the Woods, which tells the story of what happened to Jack and the Giant (illustrated by Jillian Nickell).

Then we looked at the troll from The Three Billy Goats Gruff – what was his story, after the three goats trotted off, leaving him sitting in a river, with a thumping headache? 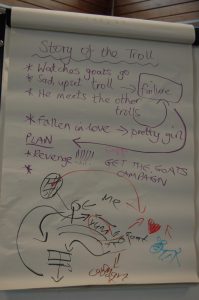 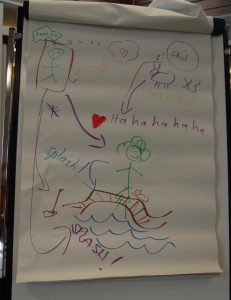 The children created a wickedly hilarious tale, where Mr Troll, rejected as a failure by the other trolls, goes after the goats for revenge. However, the smart goats creat a ‘Trojan’ Mrs Troll, which Mr Troll falls in love with. When the goats push her off the bridge, Mr Troll dives down to save her. Of course, everyone knows trolls hate water and the other trolls are impressed with Mr Troll’s courage and think he might be handy to have around after all. As the trolls embrace their new hero, the goats happily trot off to continue their adventures.

Another of the fabulous tales the children created was concerning ill-fated Mr Wolf.

Determined to get his revenge on the woodcutter, Wolfie throws a stone into the undergrowth, intending to pounce on the woodcutter as he goes to investigate the strange noise. However, little does the wolf know it is a magical stone, which rebounds on a tree, creating…MUTANT TREE!

The tree grabs poor old Mr Wolf, Whomping-Willow style, and hurls him out of the magical realm where he lands on Mount Everest. The woodcutter and the good folk of Fairytale Land are free of the pesky wolf forever – hurrah! But…what happens to the wolf? The hand of a Year 6 boy shot up in the air – he suggested that as the wolf landed on the mountain, he landed in a massive  heap of snow and when an innocent skier saw him, the legend of the abominable snowman was born! Genius!

The imaginations of the children were fabulous and I hope many of them go on to become storytellers, because I want to read their stories!

It was also lovely to see how engaged they were. One boy came into the hall, convinced he would be bored, head in his hands, staring at the floor and refusing to face the right direction. Before long, his hand was first shooting up in the air, his face glowing with excitement. And that’s what makes these author visits so worthwhile – engaging with the children, seeing them become excited about stories and imagination, especially when they’re least expecting it!

So a huge, troll-sized thank you to Wellesley Park Primary School for inviting me in for a truly magical and memorable day.